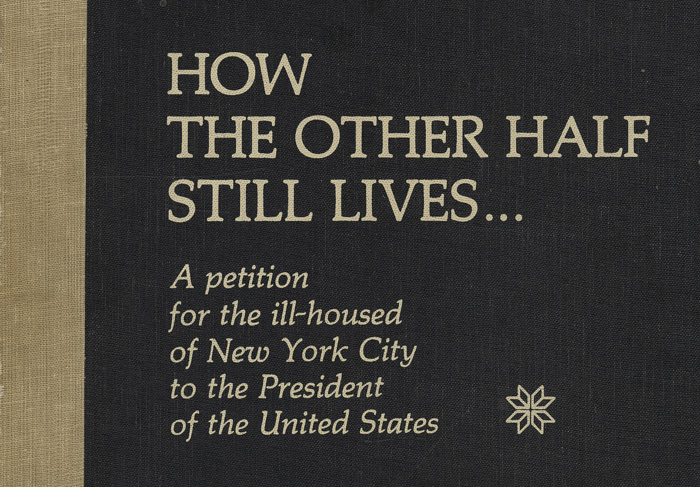 Photographs for a foundation- sponsored, privately published monograph (for limited distribution) titled “How the other half still lives,” based on a Bob Adelman idea to depict the current plight of the poorly housed, sometimes in the same New York neighborhoods that Jacob Riis did his pioneering study. The publication was used as part of a petition to try to persuade incoming President Jimmy Carter to make a commitment to improving public housing for the poor.

Text from the book

TO THE PRESIDENT OF THE UNITED STATES

WE PETITION you on behalf of the men and women and children whom you will see in the pictures that follow. They are the citizens of New York City living in neighborhoods forsaken by the rest of society,

We exercise the venerable right of petition through modern means, through photography. Government today is often buried under a mountain of statistics, suffocating from endless – and impersonal – reports and numbers. There have even been attempts by people who have not walked the streets of our once-great cities or ventured into the slums of rural America, to prove, through computer data, that the poor hardly exist.
You, Mr. President, have made a pledge to bring government back to the people. You have already used fireside chat, the telephone and radio, and the town meeting for that purpose. It is in that spirit that we send you this photo-petition. These faces, these crumbling buildings are, we believe, more eloquent than any scholarly analysis could be.
We would like to help you to see this devastation yourself. When the Great Freeze of 1977 struck the nation, you visited stricken communities, talking of matters the people understood – as homey as long underwear – as important as fuel conservation. The New Yorkers in these photographs live in a permanent disaster area, suffering daily catastrophes which are not acts of God, but of an indifferent society.
Parts of our society are dying. Only people still live there. Tolstoy understood this process long ago. It was not, he wrote, that the Russians put Moscow to the torch during the French occupation; it was that the city which is abandoned begins to destroy itself. There are responsible estimates that approximately 50,000 apartments are being abandoned each year, most of them in solid, salvageable buildings. Landlords leave buildings because they do not yield the customary profit; banks “red-line” and disinvest, refusing to provide the mortgage money necessary for rehabilitation. The people stay because there is nowhere else for them to go.
The government over which you preside is the unwitting cause of much of their suffering. Federal tax policies facilitate and mandate the exodus of both business and the upper and middle-income taxpayers. Much more is lavished on suburbia than on public housing, which is often unlivable, besieged by vandals and muggers.
While the government has been helping the affluent to flee, the impact of agricultural support programs has uprooted thousands of landless, under-educated people and forced them into cities. The welfare problem of New York City, Mr. President, is more often than not the result of events which took place in South Carolina or Puerto Rico – or Georgia.
We petition you now for your eyes and your heart. Once you see, you will be moved. In this spirit, we present these faces. They speak for themselves.